On Tuesday (not this Tuesday, or last Tuesday, but the Tuesday before that) I arrived in Panton Vermont–a town just south of Burlington where I was staying the night. I had been on the road almost a week and still I didn’t have much of a plan. I had no return transportation. I had no room booked for Montreal. Tuesday night–a night when I was a guest in someone’s home with electricity and internet–seemed like a good time to get this all sorted out.

First I looked at Amtrak tickets. Where they available for the days I wanted? Were they obscenely expensive? What cities could I leave from? Did I need to box my bike? I had researched this several months before and my research led me to believe that I could take my bike on the train from Montreal to New York City. But on Tuesday I found out this was not true. There was absolutely no way I could take my bike on the train. Not in one piece. Not in a box. No way.

This was a drastic change to my trip plans. I evaluated my new options. The plane option was eliminated immediately. The idea of it stressed me out so much I didn’t even look into it. I could ship my bike, but that would be a pretty big expense, plus the burden of boxing my bike and then being without it for the remainder of the trip. The third option was riding my bike home. That one made sense. I mean, I came here to ride my bike.

But if I was going to ride my bike home I needed to go to Montreal, like, now. So next I got on Airbnb, which I had never used, but seems to be a popular thing these days. I scrolled through my options. I looked for a place with good reviews that was cheap but not sketchy. I found a few that I liked. I sent some inquiring messages. The responses were disheartening. We’ll be gone this weekend! The place just got booked! Sorry! Airbnb started sending me emails saying that 80% of places were booked for Montreal this weekend. Hurry up! They sent me emails saying verify your identity! Which I began doing until the fear of identity theft took over and I stopped midway through. I looked into hostels, which seemed to be very expensive considering that I would be sleeping in a room with a bunch of nineteen year olds that would wake me up when they came home from the bar at 3am.

By this point I was listening to Amtrak hold music while refreshing the Airbnb page to see if anyone had responded to my inquiring messages and I was pretty stressed out. I recognized the stress in myself: mind spinning, hands shaking, jaw clenched, and I was like FORGET THIS. Forget Montreal. I did not come here to be stressed out. I came here to unfurl all of the stress. I came here to ride my bike and read and get sunburned. Forget Amtrak. Forget Airbnb. I’m just going to ride my forgetting bike.

The next day I readjusted my mindset. Perhaps I wouldn’t go to Montreal. But it didn’t really matter either way. Because the trip was not about Montreal. Montreal was just a convenient endpoint. It was just one of thousands of places I had never been. It was nothing special. I set off for North Hero, Vermont with a trip rearranged. Until I saw a sign just north of Burlington: Montreal, this way, it said. And I felt a tinge of sadness that I wasn’t going to Montreal anymore.

I mean, we didn’t come here to get stressed out. 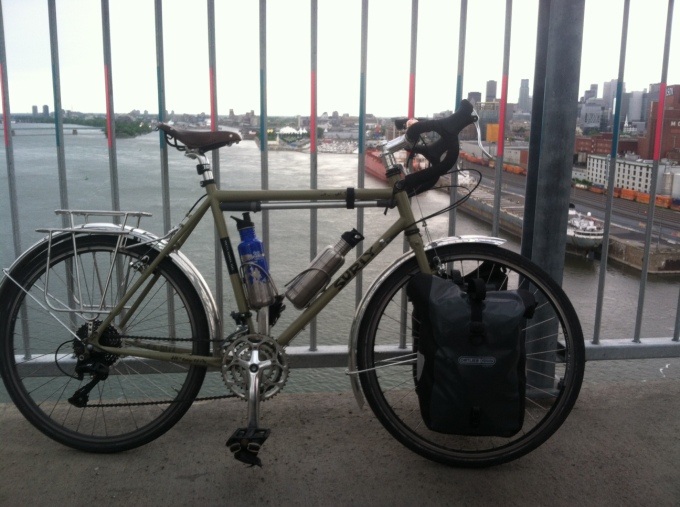