This doesn’t really apply to this blog post, but I spent a lot of time trying to rewrite the html so that the pictures would be right beside each other instead of vertical (it was kind of hard!) plus snow is pretty.  So I don’t want to delete them.  Also it one example of what I do with my liberal arts education–I teach myself things!

Here are other things I gained from a liberal arts education (I double majored in History and Spanish by the way):

It taught me to be intellectually curious.    The liberal arts curriculum allows for independent education, called Independent Studies.  When I decided my Junior year that I wanted to study a South American indigenous language, the curriculum and the school promoted that interest.

It taught me to learn independently.  So when I decided I wanted to learn an indigenous language I found a linguistic professor sponsored my independent study.  I spent one hour a week working with the professor, but the rest of the time I had to teach myself.  I got really obscure books on loan from the library.  I read them.  I took notes.  That was my class.  The professor was very helpful, but mostly I taught myself.  Did you know the English word shark is believed to be rooted in the Mayan ‘xok’?

It taught me to question everything.  In one of my college Spanish classes we super-analyzed this photograph of Walker Texas Ranger. 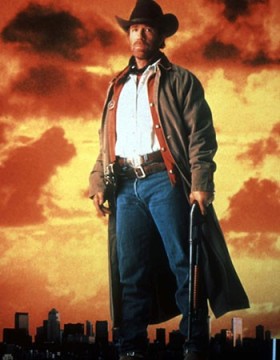 At the time it seemed kind of dumb.  Actually it still seems kind of dumb…  I mean, was there nothing better for us to super-analyze?  But the point was, we were encouraged to question the true motivations of advertisers, businesses, writers, artists, etc.  I learned to think twice about any proposed solution, especially things that seemed too good to be true.

It taught me that there might seem like there is nothing, but there is always a book.  One summer during college I had an internship in Mexico.  I lived in a house with no internet, TV, or radio.  Which wasn’t a big deal until I got traveler’s sickness and basically had to stay within a 10 foot radius of the bathroom.  I could have gone crazy with boredom, but instead I just read all day.

(Before continuing I want to make a few disclaimers.  First, you don’t have to be a liberal arts major to have the qualities that I listed above.  I have some friends who were not liberal arts majors, or who didn’t even go to college, who are curious, self-starters.  But a liberal arts major is helpful for people like me who need a push in the right direction.  Second, the university atmosphere of self-education, independent study, and intellectual curiosity exists parallel to an intense achievement oriented environment.  The latter could very easily obliterate the former in the appropriate circumstances.)

But this is why I’m not afraid of not having a job.  I should be more specific, actually.  Technically I do have a job.  I wait tables.  And if I really were unemployed I would be worried because I would be broke and that would be bad.  What I mean is I’m not scared of not have a job that is stimulating, satisfying, meaningful, personally affirming, and admired by the rest of society (because my current job is none of those things).  I’m not scared because everyday I do stimulating, satisfying, meaningful and personally affirming things just for funzies.  I read, post on this blog, brush up on my Spanish and French, ferment some kefir, learn how to write html, and maybe do a Stanley Kubrick movie marathon.

Now combine the qualities of a liberal arts education with the internet-age and what do you get: free and open knowledge, free opportunities to publish (like this website), free venues for self-promotion (facebook, linked-in, twitter).  Plus there are sites like craigslist and fiverr (this site is awesome) that are specifically designed to help an individual sell his/her services.  You can practically design your own career on the interwebs.

I will leave you with this: Hi, I’m Anne Foster.  I graduated with a BA in History and Spanish.  I have strong writing, editing, publishing, research, and Spanish language skills, and I have experience in teaching, communications and data-entry.  I’m pretty cool.  If you are interested in any of the aforementioned skills please contact me in the comments about temporary, permanent, or freelance work.